Age: 19
Handicap: 3
Rank: Rookie
B30T Record: Rookie
Hometown: Cheltenham
AKA: Abdul, Dougal
Notes: At uni, so we have no idea what form he will be in by the time of the tournament. Baby of the group, will need his ID on nights out. 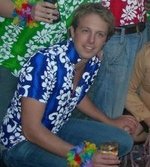 Age: 31
Handicap: 6
Rank: Rookie
B30T Record: Rookie
Hometown: Cheltenham
AKA: Chipper, Scotty
Notes: Loved up. Great short game. Is looking forward to the drinking. Is the highest paid person in the country per hour of work (averages around 1 hour per month).

Age: 27
Handicap: 7
Rank: 7
B30T Record: W - 2, D - 0, L - 1; 2 career points
Hometown: Cheltenham
AKA: Spackers, Monty
Notes: Possibly the most off target golfer in the group, makes pars from almost anywhere but also liable to lose a lot of golf balls. Wears outrageous clothes and like Henners is also partial to a cheeseboard. Gets withdrawal symptoms leaving Cheltenham for too long. Posh boy of the group, will fit in perfectly with the scousers.

Age: 29
Handicap: 15
Rank: 13
B30T Record: W - 1, D - 1, L - 1; 1.5 career points
Hometown: London
AKA: Ciche
Notes: French last year and English this year. Sorry about the picture, I will update when I get another one, but this is what you find when you type "French man" into google. Slow starter last time out but has a ludicrously good swing. Just needs to learn to hit a driver.

Age: 26
Handicap: 24
Rank: 7
B30T Record: W - 1, D - 1, L - 1; 1.5 career points
Hometown: Cheltenham
AKA: Barnetto, Spud, Shunter
Notes: Massive bandit, joined Luke in taking a lot of money off everyone in the Lilley Brook summer golf tournament (www.golfclub18-30.weebly.com). Was shocking at putting, but has improved and is now just really bad. Most likely to bring more than 2 bags on tour to fit all his make up in and get fined as a result.

Age: 31
Handicap: 36
Rank: 14
B30T Record: W - 1, D - 0, L - 2; 1 career point
AKA: Chelsea Rent Boy
Notes: Complete unknown quantity, has recently had some more lessons, and now has a massively high handicap so could be competitive! Big Chelsea supporter so hopefully they will be knocked off the top by the time we tee off and replaced by Everton.